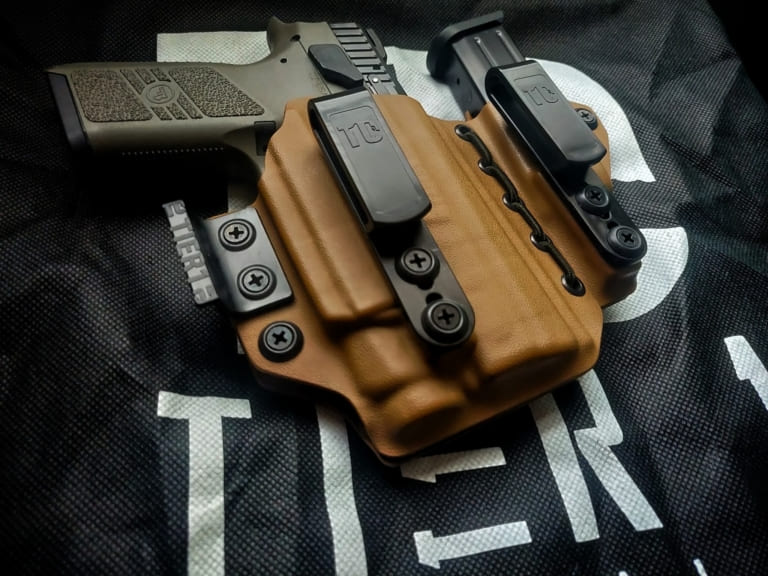 It’s been about a year since I got the CZ P-07 in OD Green from Instruments of Freedom and I think it’s about time I reviewed it. For those new to the website, I’m a huge CZ fan, well… at least a huge fan of the metal CZs. After playing with a P-07 Urban Grey at NRAAM I decided I’d go ahead and give it a try over a CZ P-01; which broke the trend of me reviewing metal framed CZs; and let’s be honest… who hasn’t reviewed the P-01?

So, I got in touch with Instruments of Freedom in Ohio, and Ethan was generous enough to hook me up with an OD Green P-07 for cheap; otherwise I’d probably have gotten a plane Jane black P-07 which would have been suuuuper boring to take pictures of.

Important Information: You will notice that there are still “Duty” marked models floating around in the used sections of gun counters; avoid these. The “Duty” marked models did have bulging issues which promoted CZ to create the “Gen 2” of the pistol which is what’s being reviewed here.

This review was originally posted by TacCat on his old website on August 28, 2020. Because of that this review will not have the same layout as other firearm reviews that you will find across the website. 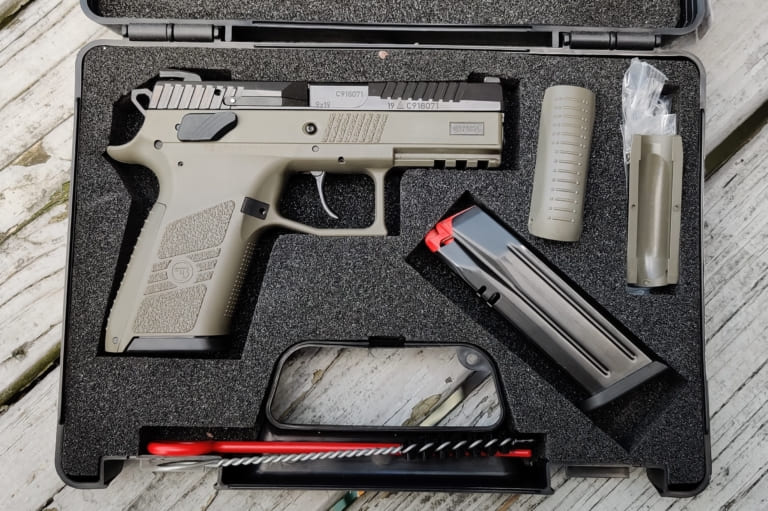 The CZ P-07 comes from the factory in CZ’s typical box where you push the center to open it up. Inside you get the gun, 2-15rd magazines, a bore brush, obligatory gun lock, your standard paperwork, and 2 additional back strap choices. So, nothing to out of the ordinary here. 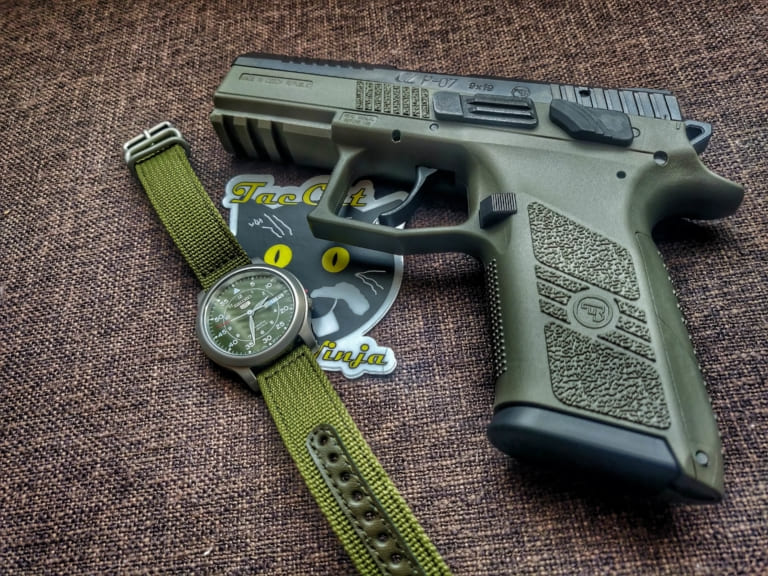 The CZ P-07 was a gun that I had originally not really cared for, then I got interested at NRAAM, and then I got mine. Needless to say, there was a honeymoon phase with this gun. I absolutely adored it initially; I thought it was absolutely fantastic. I liked it so much that I ordered a Tier 1 Concealed Axis Slim for it and a TLR-7. The question is…what do I think about it now?

How it shoots & Reliability

Let’s go ahead and knock out the boring part of the review; reliability. As you’d expect from CZ I haven’t had any issues with the handgun yet, but I’ve only put about 1,000 rounds through it in total, as well as a ton of dry fire practice. It’s fed quite a few different brands of 115gr 9mm, Geco 124gr 9mm, as well as 124gr/147gr Federal HSTs.

Considering the dimensions of the CZ P-07, I thought that it would recoil a little softer. It has roughly the same height as the Glock 19x while having a shorter slide… meaning less reciprocating mass. It also has that lower bore axis that CZ pistols are known for. Despite not being as soft shooting as I thought it would be, it did a real good job of keeping it’s muzzle down resulting in fast follow-up shots.

Ergonomics for the pistol are a love/hate situation. You’re either going to love what the P-07 brings to the CZ line-up, or you’re going to hate it. Starting at the slide, the P-07 offers a lot more surface area to grab onto than the standard 75 series of pistols; but the front serrations on the slide are terrible and could have been milled a little deeper. As they are, I have a hard time actuating the slide for press checks even when the pistol is cocked. This issue becomes even more evident, even on the rear serrations, when your hands get a little damp from being sweaty.

Moving down to the frame, the decocker is intuitive and easy to actuate, the optional safety is like a traditional 1911’s while having a slimmer profile,and the slide release is about par for the course for CZ’s, however I’d say it’s more difficult to hit, and it’s a right hand only control. The trigger guard is fantastic. I absolutely LOVE the trigger guard on the P-07. It’s nice, roomy, and allows the user to use some pretty chonky winter gloves without any issues. It also has a superbly done undercut to boot.

Side Note: If your P-07/P-09 only came with the decocker or safety, CZ will send you the other control for you to swap it out.

Now lets talk about the texturing on the frame. The backstraps horizontal lines are spaced too far apart and the untextured space between the side texturing and the front strap can really let your hand move around when damp or sweaty due to how slick the polymer is. If you’re looking into getting this gun, I’d definitely recommend ordering some Talon Grips or something similar along with it.

My biggest critique for the gun is on the backstrap. For whatever reason the mainspring/hammer spring plug is as long as the River Nile which turns the grip length from being Glock 19-ish into being Glock 17-ish. With that Glock-17ish grip, you’re getting a 3.75″ barrel, whereas with the Glock 19 you’re getting an even 4″ barrel. It’s a really weird conglomeration of things that’s left me scratching my head. Just for a slight comparison, here it is next to the CZ SP-01: 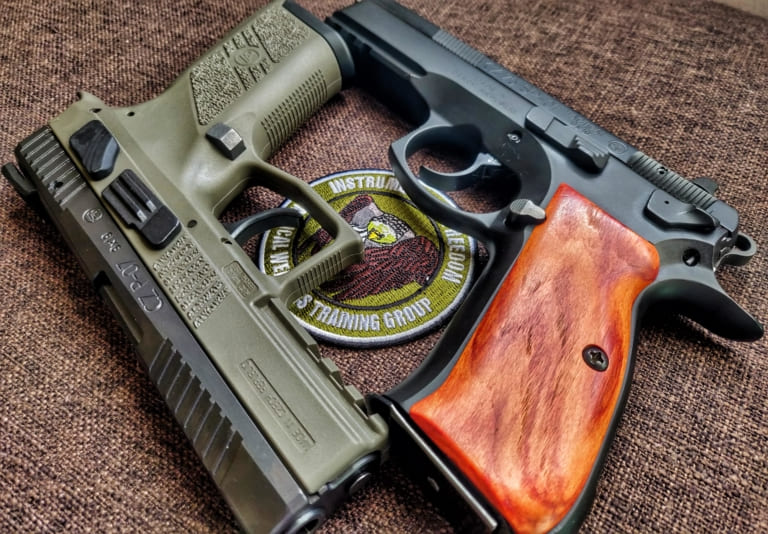 As you can see, it’s pretty similar in size to the CZ SP-01 which has flush fit 16rd magazines available through Mec-Gar and it comes equipped with a 4.6″ barrel. And yes, they do make a polymer version of the SP-01 that’s called the SP-01 Phantom.

As far as the trigger goes… I’ll be frank, it’s kinda sucky. Before I get to the pull weight, let’s talk about the shape/feel of the trigger. First off, it’s really slick. When I have sweaty hands and I’m shooting double action, my finger definitely tries to slip around on the trigger face; which is also kinda narrow or at least feels like it. This has been a first time experience for me from all of the handguns I’ve shot.

Double action stacks weird, initially it’s very little weight, and then BAM! You’re hitting all the weight (around where the trigger resets at for single action), and then it breaks. Single action is…well, reset is pretty long and it’s pretty mushy. The weird thing about single action is, when you’re dry firing you don’t really know when you’re about to hit the wall…you just do.

If you’re going to carry this cocked-n-locked, be ready for a LOT of travel before hitting the wall in single action.

Now for the cool part about this trigger system. The Omega Trigger System is almost like a jab at Heckler & Koch’s system on the USP line. It’s a lot simpler to work on than other hammer fired guns and the end user can swap between the decocker/safety should they so choose. Looking at the internals though, I’m not going to say it’s as simple as the USP/P2000’s trigger system, but it’s pretty damn close while being a few benjis cheaper.

“Well, TacCat, how does it carry?”

The ratio of slide:grip seems just right to where the gun doesn’t need something to prevent it from flipping like the Glock 19x wanted to do with me; however it could be the TLR-7 that aided in that. The flush fit 15rd magazines are also level with the notch on the back of the grip which means there’s no snag point there. Having primarily carried the P-07 with a TLR-7 attached, I have to say it carries phenomenally well for AIWB.

The beaver tail is rounded (compared to the SP-01’s semi-point) and there’s no real hot spots that I felt on my tummy. All around though, there isn’t anything to complain about when it comes to carrying the P-07. It doesn’t weigh a whole lot, there’s no hot spots, and it’s real easy to get a good consistent draw with.

Going into the CZ P-07 and looking at it as a review gun, I thought I could keep myself from doing comparisons of it to the metal framed CZ’s, afterall, the CZ 75B was my first handgun. After having the 75B, the 75 Compacts, and the SP-01 Tactical though I’ve found it almost impossible to not do the comparisons; especially when I have the SP-01 Tactical in hand.

If it wasn’t for the fact that I was spoiled, in a sense, prior to the P-07, I do believe that my thoughts on this pistol would be a lot different. It feels and handles a lot like a standard slide on frame pistol, versus the slide in frame that I’m accustomed to with CZ.

So, to add some light to my obvious bias review let’s go over some benefits of getting the CZ P-07 to wrap things up:

All around, it’s a good pistol that has it’s own quirks going with it… But it’s reliable, it carries well, and the aftermarket support has been there for it from the beginning. I won’t not recommend it to people, but if you’re a person who loves the CZ SP-01, or P-01… I think you’re going to find yourself underwhelmed by it. 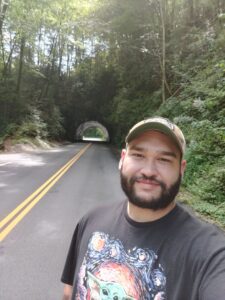