This article is apart of our Comprehensive Guide to Handguns. If you’re new to firearms in general, or just to handguns, be sure to checkout the other parts of this guide listed at the end!

In this portion of the Buyer’s Guide be ready for a lot of reading and very few pictures. Caliber selection is a very dry subject to cover with some external sources to read for your own knowledge. If you’re wanting the short answer, purchase a 9mm as your very first handgun.

In the world of handguns you have two categories of handgun calibers; Mouse Calibers and Duty Calibers. As implied by the name Mouse Calibers are smaller and aren’t necessarily the best for self-defense purposes; but they are fun range toys.
Duty Calibers, while not as ideal as using a long gun such as an AR-15, have been deemed good enough for Duty purposes and by default, self-defense purposes. 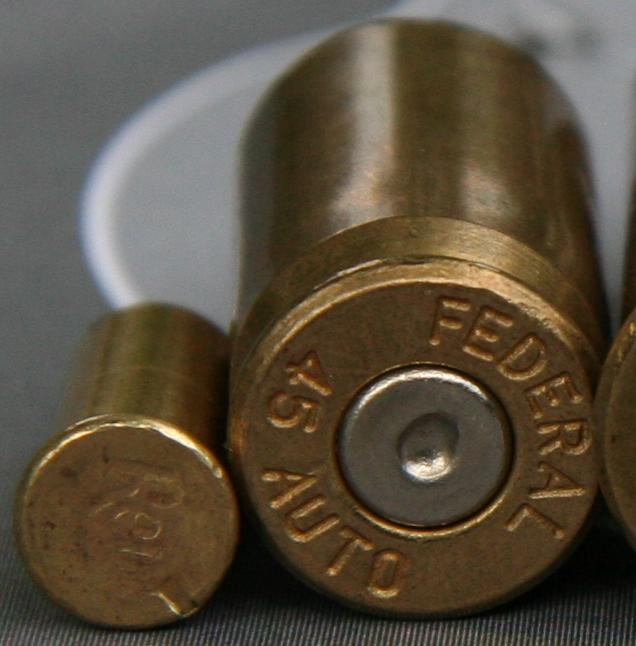 For the sake of brevity, I’ll only be covering commonly found calibers. If you don’t see the caliber listed below it’s for one of a few reasons:
1. Very few guns chambered in the round.
2. Limited ammo variety & availability
3. Requires a caliber exchange kit.
4. It’s too difficult to find good ammunition for it.

The FBI Ammunition Protcol & You

Before we jump into the calibers it’s important to get a baseline on what I’m talking about with calibers, that baseline is the FBI’s Testing Protocols for Duty Ammunition (and thus Defensive Ammunition). These protocols came to be shortly after the 1986 FBI Miami Shootout and seeing how ineffective handgun rounds of the time were against bad guys.

Every bullet gets graded on a scale that goes up to 500. This score doesn’t measure lethality as much as it measures terminal reliability. The bullets are graded on penetration depth, weight retention, expansion, and permanent wound channel size. The temporary wound channel isn’t taken into consideration.

Through these barriers the bullets have to reach a min-max depth of 12″-18″ with the ideal depth being 14″-16″. Under penetration is penalized more than over penetration.

Reason for depth: In the 1986 shootout a would of been fatal shot wasn’t because it failed to penetrate adequately through the assailants side. Taking this information to heart, literally, they found that the average distance between armpits is 12″-18″; ensuring adequate penetration no matter what.

Why This Matters To You:

No, but Law Enforcement, including the FBI, defend against bad humans, like you might. Remember you are your first responder. Bullets that don’t penetrate well in the FBI testing don’t penetrate adequately in real life. This results in minimal damage to an assailant compared to what it could have been. The same goes for bullets that fail to expand properly.

A lot of people are under the belief that the testing and subsequent results mean that a bullet will go straight through an attacker which couldn’t be further from the truth. Besides being shot in an appendage, there have been no documented cases of a bullet completely passing through someone when fired out of a handgun.

Mouse Calibers are calibers that either don’t, or just barely meet the FBI’s minimum penetration depth requirement. They have less recoil than duty calibers and make themselves at home in very small, very compact sized firearms.

.22LR is really a caliber that’s best saved for target shooting and pest control. The only real exception is if you suffer from some form of medical condition that prevents you from shooting larger calibers such as arthritis.

Of course, carrying a .22LR is better than carrying nothing, but you have to understand the limitations of the caliber; especially out of a handgun. To give some anecdotes, there are several incidents where individuals have attempted suicide by shooting themselves in the temple with a .22LR handgun, and lived to see another day without any permanent damage.

Beyond limited lethality with the caliber, Rimfire calibers are less reliable compared to Centerfire cartridges. For magazines, single stack .22LRs are better than double stack .22LRs because of something called “rim lock”.
The short & sweet: Rim Lock is when the rim of one cartridge jumps above/below another rim and seizes up the magazine.
The primers on rimfire cartridges also don’t detonate as reliably as they do on centerfire cartridges for a variety of reasons.

When it comes to effectiveness, .22LR is a peashooter… or less than efficient at stopping an attacker. Out of a handgun you would be highly lucky to get a wound channel as thick as a pen and one that meets the FBI’s minimum requirement for penetration (12″) 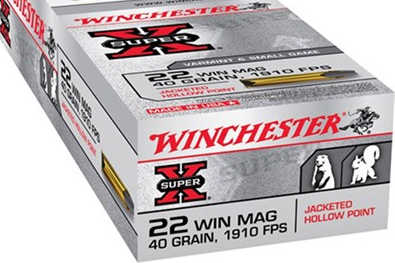 If calibers were Dragonball Z characters, .22LR would be Goku, .22WMR would be Kakarot. It performs a lot better than .22LR ballistically without having that large of an increase in terms of recoil.

Between the two, I do strongly encourage you to opt for a .22WMR over a .22LR. .22WMR ammunition doesn’t only perform better, but the quality of the ammunition is far better than what is seen with .22LR.

Pros: Low recoil, Adequate Penetration, Made to higher standard than .22LR | Cons: Ammo costs the same as 9mm, Rimfire, Can be finnicky in semi-autos 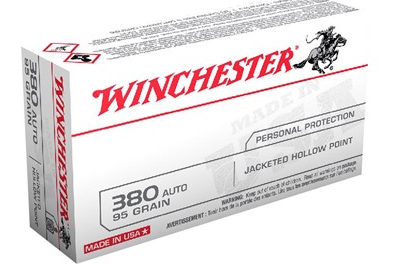 .380ACP was created by John M. Browning (the guy who designed the 1911) to perform like a downsized .45ACP, but out of old vest pocket guns that were ever popular in that era.

After reviewing the available testing information for the Mouse Calibers we have come to a very weird, very difficult to admit conclusion on what we would collectively recommend for defensive purposes. As surprising as this sounds, if you absolutely have to use a Mouse Caliber, it would be hard to recommend something other than a .22Mag snub nose revolver in this category.

Even while competing with the pressure drop caused by cylinder gap, .22Mag is reaching minimum penetration depths more reliably than .380ACP when using common ammunition; which the Underwood/Lehigh rounds are not. It’s doing this while offering less felt recoil and more controllability (which is vital with smaller guns).

Duty calibers are calibers that have been, more or less, approved by the FBI’s Protcols for duty, and thus defensive purposes. All of these calibers, per an FBI’s Press Release are equal to each other; none of them perform better, terminally than the other.

When it comes to the Duty Calibers, the biggest difference between the three listed will be: Weight, Recoil Impulse, & Capacity 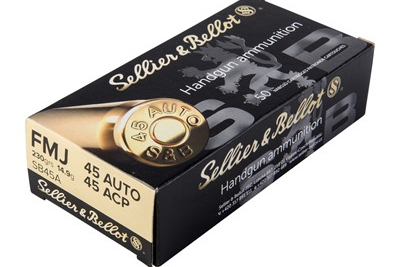 .45ACP is an old, slow moving, and obese caliber that was originally designed by John M. Browning to be fired out of a 5″ barrel. Today we still see it being issued, although in a limited capacity compared to decades ago.

In a full size flush fit magazine, .45ACP handguns are only squeezing in 13 rounds via the Glock G21. With 230gr bullets this adds 7 ounces of weight (not including the weight of the casings) to the firearm. In return you’re getting a relaxed, slow, but heavy recoil impulse; almost like a German Shepherd leaning against your leg. 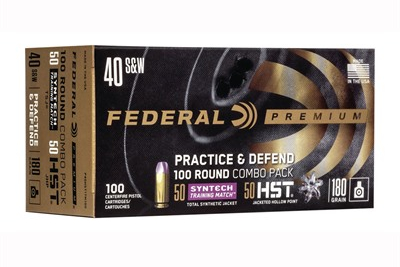 .40S&W came to be out of the original FBI Request following the 1986 Miami Shootout. While the history lesson can wait, .40S&W used to be the top dog for defensive purposes.

In a full size flush fit magazine, .40S&W handguns are squeezing in 15rds via the Glock G22. With 185gr bullets, this adds just a hair over 6 ounces of weight (not including the weight of the casings) to the firearm.

The recoil impulse of .40S&W is arguably the worst of the three Duty Calibers being mentioned as it takes the worst attributes of the other two and combines it. With it you’re getting a snappy, quick, and heavy recoil impulse; just like if that German Shepherd from above ran square into your leg head first. 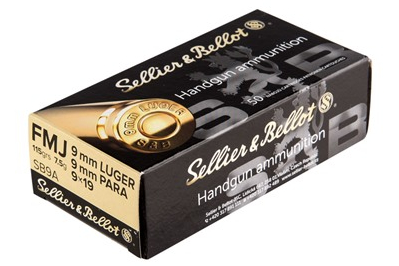 9×19 has a very long and very rich history, it’s also come a long way in terms of terminal performance since the 1980s.

In a full size flush fit magazine, 9mm handguns are squeezing in 17rds via the Glock G17. With 124gr bullets, this adds about 5 ounces of weight (not including the casings) to the firearm.

The recoil impulse of 9mm is quick, it’s snappy, but it’s light feeling; think of it like a tiny Chihuahua running into your leg at full speed and you have an understanding of how it feels to shoot.

Out of the above calibers JustPews recommends 9mm due to it’s versatility as there’s something we didn’t cover. It has short barrel specific rounds such as 150gr Federal  Micro HSTs that recoil softer than .380ACP out of similarly sized platforms. Add this with the fact that it normally costs $0.14/rd for training ammo and $0.30./rd for defensive ammunition (the same cost for .380ACP training ammo) and you have a clear cut winner.

In addition to the versatility, such as being able to suppress it well with 147gr ammunition, a majority of aftermarket accessories for guns that come in multiple calibers only get made for the 9mm and .40S&W models. All of this being said, if you cannot deal with the snappiness of 9mm, we would recommend you checkout .45ACP as long as the barrel exceeds 4″ in length (anything less and you can encounter penetration issues).

When you decide on the caliber you’re going to go with, two valuable resources are Lucky Gunner’s Self Defense Ammo Tests as well as Ballistics By The Inch. Lucky Gunner might not test into 10% ordinance gel like the FBI, but their tests are repeatable and as controlled as they can be with a reasonable budget; a large amount of YouTube testing channels don’t even try to control the environment in which they test which skews results.

Ballistics By The Inch as a way for you to evaluate how reliable the ammunition will be out of different barrel lengths. While not always being the case, here’s how velocity can affect a bullet:

Too Fast: The Hollowpoint can fragment upon impact, causing there to be a minimal permanent wound cavity.

Too Slow: This will result in the Hollowpoint not expanding upon impact which results in deeper penetration. While over penetration is a fear, it’s something that’s seldomly been documented with handgun calibers.

If you've enjoyed this segment, be sure to sign up for our newsletter!

Tired of scouring the internet for all the answers you’re looking for in regards to handguns? JustPews put together this comprehensive beginner’s guide just for you! Checkout the other parts to get headed in the right direction towards your first purchase!